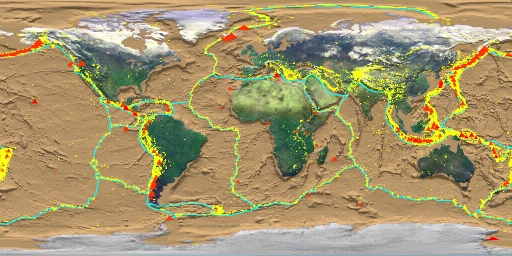 The Earth Dynamics group seeks to understand Earth’s tectonic system now and in the past, using the natural field laboratory to constrain complex processes, and increasingly using numerical models to formulate and test hypotheses. We developed and now operate the world’s most powerful electron microprobe to carry out new geologic dating techniques.

Fundamental questions remain about how the Earth works that require interdisciplinary approaches and new tools. The faculty of the Earth Dynamics group explore processes over a vast range of both scale and time in order to understand the past and future development of the Earth. This group has the only faculty on the UMass campus with expertise on processes happening within the Earth and below the critical zone. Processes that occur deep within the Earth have surface manifestations that greatly impact our society, such as devastating geologic hazards, the development of fluid flow paths, tectonic controls on climate, and the distribution of precious mineral and energy resources.

Michele Cooke’s research explores the mechanics of fracture, fault and fold development. She investigates the processes contributing to the development of geologic features by comparing natural patterns to numerical and analog simulated systems. In other studies, geologic data collected in the field and laboratories guide computer, analytical and analog modeling of deformation processes. Three-dimensional Boundary Element Method modeling, and analog modeling play strategic roles in this research. Her current research projects include 3D investigations of active fault zones in heavily populated Southern California and investigations into the mechanics of fault system evolution. Cooke also runs the Geomechanics laboratory and the Physical Modeling Laboratory.

Mike Jercinovic oversees the UMass Microprobe Facility. In a joint effort with Cameca, Inc. the Microprobe Facility leads the Ultra-Chron project. This project involves comprehensive redesign, development, and optimization of the SX electron microprobe specifically for making major improvements in microprobe-age dating techniques, and will be much more broadly applicable as well. Our goal is to test the limits of microprobe monazite geochronology. The Microprobe Facility also houses a CAMECA SX50 Electron Microprobe that allows researchers to perform high quality, quantitative chemical microanalysis and obtain compositional maps of a wide variety of materials.

Mike Williams' research concerns the geologic history of deformed and metamorphosed regions and in particular, regions that have resided at specific crustal levels for long periods of geologic time. These regions are primary models for tectonic processes in the modern continental crust. Although his research ranges from structural geology to metamorphic petrology, Williams’ primary interest is in the interaction between deformation and metamorphism. Current research projects involve the development of techniques to date deformational and metamorphic processes, the development and evolution of shear zones, the interpretation of structural and metamorphic microfabrics, the analysis of P-T-time-deformation paths, and the Precambrian geologic history of the Canadian shield and the Southwestern U.S.A. Williams has a strong regard for field geology; detailed geologic mapping accompanied by field based structural and metamorphic analysis are a central part of his research. Together with Mike Jercinovic, Williams has been a co-leader of Ultra-Chron project, dedicated to developing and optimizing the techniques of microprobe geochronology and using the electron microprobe to constrain the timing and character of tectonic processes.

Research in geophysics and paleomagnetism in the department is led by Laurie Brown. Her current research uses rock magnetism and paleomagnetism to investigate geologic problems ranging from composition of the lower crust to climate change. One project uses aeromagnetic, satellite and ground magnetic data, combined with rock magnetic properties of lower crustal rocks exposed at the surface to determine what is magnetic in the lower crust.  Other rock magnetic studies have concentrated on anorthosites, granulite facies rocks in the Adirondacks, and Archean rocks in the Lofoten Islands of Norway.  Investigations of climate change using magnetic properties of lake sediment as proxies are underway on samples from Lake E in northeastern Siberia.   Secular variation of the earth’s magnetic field is another research area, using young volcanic flows from Patagonia, the Springerville volcanic field in Arizona, and lava flows in the Rio Grande Rift in study magnetic field variations including reversals and excursions.

Chris Condit's interests range from interpreting patterns of basaltic volcanism through planetary science to geoscience education and outreach. His work on basaltic volcanism has concentrated mainly on two areas in Arizona: the Springerville and San Francisco volcanic fields, although his contribution to the "Big Island" map of Hawaii involved work on the northwest flank of Mauna Loa. An outgrowth of his mapping of the Springerville volcanic field resulted in the generation of a computer program he wrote, a digital geologic map for use on the Macintosh computer, the first such distributed by the Geological Society of America on CD. Condit has been an active participant in the on-going geologic training of NASA astronauts during the Desert Research And Technology (DRATS) campaigns in 2010 and 2011 and will be one of five geologists selected to participate in 1:1 astronaut training during the week of July 21 to 27, 2012 in Flagstaff, Arizona.  This work has resulted in several articles, one by the Associated Press in 2010 and several NPR interviews.

Mike Rhodes is a Five-College Professor in Geochemistry.  His current research includes the study of Mauna Loa, Mauna Kea and Kilauea volcanoes in Hawaii, where he attempts to relate lava compositions and mineralogy to the magmatic history of the volcanoes in order to understand quantitatively how a volcano works.  Additionally, in collaboration with the State Geologist, he is spearheading a new research effort to evaluate the geothermal potential of Massachusetts and New England.  This new reconnaissance approach, which measures the heat production of surface rocks, is more rapid and less costly than the traditional approach of measuring heat flow in bore-holes. If successful it could have important economic implications for local communities, and internationally.  Rhodes is Director of the Department’s X-ray Analytical Facility, a regional geochemical research center, used by researchers from across the country as well as by faculty and students at this University and the Five Colleges.  The Facility operates two XRF spectrometers, an X-Ray diffractometer and a recently acquired XRF core-scanner.  The core-scanner will add a new dimension to, and considerably enhance, our already strong and internationally recognized climate and global change research group.

Sheila Seaman’s main research interests are the origin and evolution of felsic magmas and volatiles in magmas, as preserved in volcanic glasses and in nominally anhydrous minerals.  She is currently working on the influence of water in nominally anhydrous minerals in lower crustal rocks in northern Saskatchewan in generating granitic melt in those rocks.  She also has projects in Iceland in the Oxnadalur bimodal magmatic complex (with M.S. student Jason Kaiser) on the origin of felsic magmas in a spreading center/plume setting, and in the Askja caldera complex (with M.S. student Heather Clark), on evaluating the volatile composition and abundance during the 1875 eruption.  She is working in the Silurian supervolcanos of coastal Maine.  She established and oversees the Fourier transform infrared spectroscopy laboratory in the Department of Geosciences, in which students and faculty measure volatile and organic compound abundances in geologic materials.