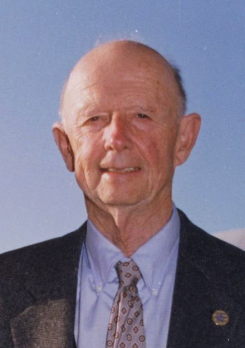 Ward S. Motts, pioneering hydrogeologist and emeritus professor of geology at UMASS Amherst, died peacefully aged 95 at the Hospice of the Fisher Home in Amherst, MA. A memorial service had been planned for March 29th at South Congregational Church in South Amherst.

After careful consideration by his family, Ward’s memorial service has been postponed. A memorial service will be held at a future date when it is deemed safe for people to meet. The health risk presented by the coronavirus outbreak is too serious to ignore and though the family is disappointed and hopes they are not inconveniencing people, they feel this is the best decision.

Born in Cleveland to German-American salesman Howard Eli Motts and Norwegian immigrant and award-winning painter Alicia Sundt, he grew up with a love of baseball. An early thrill was meeting Babe Ruth in 1934. The following year he traveled with his mother to London and saw King George V during his silver jubilee. Ward was exposed to fine art and literature from early childhood, interests that never left him. At 17, tragedy struck. Within three months he lost his father, his grandmother, and the US plunged into WWII. He went to night school and worked to support himself and his mother. Later that fall when his mother left for New York after losing their home, he stayed in Cleveland and graduated on time from West Technical High School in 1943. Despite such hardships he was accepted into Columbia University in 1944.

In June, 1945 Ward was drafted into the army and before his basic training, the war ended. He was assigned to the 977 Signal Corps and sent to Livorno (Leghorn), Italy with the occupation force to create order in a ravaged and desperate country. Returning home in the winter of 1947, he graduated from Columbia (under University President Dwight D. Eisenhower) in 1949. While in the Army he became attracted to the field of geology. In 1951 he earned his Master’s degree from the University of Minnesota and married Dona Mae Drumm immediately thereafter; together they embarked on a journey that would span 68 years. They moved to California where he was staff geologist for the Bureau of Reclamation for two years.
After earning his Ph.D from the University of Illinois, Urbana-Champaign in 1957, Ward, with Dona and baby son Paul, moved to New Mexico where he joined the US Geological Survey as a field geologist and became fascinated with the challenges and beauty of desert geology. He and his young family lived in Roswell, Carlsbad and Albuquerque, where daughter Greta was born. In 1961 Ward became adjunct professor at the University of Oklahoma, Norman and the following year, associate professor of geology at UMASS. During his 34-year tenure he pioneered the hydrogeology program and directly supervised 35 graduate theses and brought in almost $1.8 million in today’s dollars in research grants for the University. Ward worked tirelessly to preserve water quality in over 70 towns in Massachusetts, Connecticut, and elsewhere. He was a world authority on playa geology, wrote what is considered to be the bible of playa hydrogeology, and was considered a preeminent hydrogeologist in the eastern United States. Sought after by corporate titans, congressmen, and poverty -stricken farmers, his professionalism never wavered; he treated everyone with compassion and zeal for safe drinking water. One of many career highlights came when, as a result of Ward’s expert recommendations, then-Governor Shriver rejected a proposed nuclear power plant on the fire-prone Montague Plain.

After retirement in 1995, Ward’s thirst for learning continued unabated. He and Dona attended UMASS’s Learning in Retirement. They traveled to visit their children and grandchildren; viewed two solar eclipses in West Africa and the Caribbean; and attended Columbia reunions. His passion for art, music, and environmental conservation influenced both children; Paul, as a natural history specialist with the National Park Service, and Greta in music. Ward’s love of family history wove through his entire life; Motts family reunions were eagerly anticipated. A humble and often unsung hero in the world of hydrogeology, his towering achievements and honesty, integrity and compassion have earned him admiration from colleagues in Amherst, in Massachusetts, and around the world.