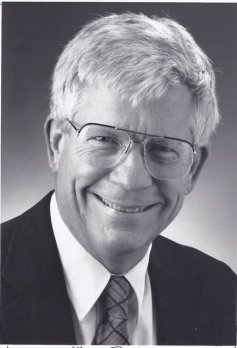 Professor George Emmert McGill passed away peacefully on Tuesday, March 13, 2018, in Amherst, Massachusetts at the age of 86.
George was born on June 10, 1931, in Des Moines, Iowa.  He moved to Minnesota for college, receiving his BA in geology and biology from Carleton College, and his MS in geology from the University of Minnesota in Minneapolis.  It was in Minneapolis that he met Esterica Choban, who became his wife in 1955.
George and Esterica moved to Princeton New Jersey, where he received his Ph.D. in structural geology in 1958. That same year they moved to Amherst, where he joined the faculty of what was then a small geology department at UMass Amherst.  George enjoyed a career at UMass that spanned nearly 40 years, including two terms as Department Chairman.  During his career, George spent many happy weeks out in the wilderness, solving geologic puzzles in remote areas of Montana, Canada, and the Southwestern US.  However, he was probably best known for his work in planetary geology.  He worked with NASA on many projects, including significant roles in the Pioneer Venus and Magellan missions.
Over the years, George played an instrumental role in building and developing the geology department he loved. While he was a devoted teacher, his true passion was working with and mentoring his many graduate students; work he continued long after his retirement in 1997.  George counted his students among his friends, and he took great pride in their many achievements.
George was also devoted to his family, and one of his greatest pleasures, particularly after retirement, was traveling with Esterica to visit his far-flung children and grandchildren.  He loved music, tended an organic vegetable garden for years, and always made sure the bird feeders were full.
George is survived by his wife, Esterica C. McGill, his daughters Kathryn Ann McGill (Grahame Waghorn), Sandra McGill Piedmonte (Brian) and Edith McGill Glasgow (Robert).  He is also survived by grandchildren Anthony Piedmonte, Brianna Piedmonte, Corinne Piedmonte, and Meghan Glasgow.