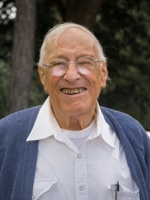 Current Research ProgramMy research covers many aspects of melting and crystallization in the Earth and planets, but most recently is concentrated on mafic magmas at crustal pressures.  A particular target has been the Kiglapait layered intrusion in Labrador and the Skaergaard intrusion in Greenland.  New studies of cumulates by Marian Holness at Cambridge have opened up a whole new avenue of research illuminating the process by which igneous cumulates form and solidify into rocks (e. g., Holness et al. 2007 J. Petrology 48, 2359-2377).  We find that this study of dihedral angles in thin section leads us back to the latent heat released when new crystal phases arrive at the liquidus.  The crystal mush overlying the solidification front tends to impede the sensible heat transfer out of the solidified rock and gives it a longer history at high temperature than before, allowing better cumulate maturation.New plagioclase composition data for the Skaergaard intrusion, combined with our earlier experimental determination of the equilibrium among plagioclase, olivine, augite, and melt at 5 kbar has permitted a new estimate of crystallization temperatures in the Skaergaard intrusion (Morse, 2008 Am. Min. 248-251).  What makes this result particularly interesting is that it matches very closely a thoughtful experimental determination by Alex McBirney and Dick Naslund in 1990.The range of plagioclase compositions at both Kiglapait and Skaergaard receives new attention as an indicator of adcumulus growth, by which an initial porosity tends to be eliminated by an isothermal exchange process.  New data show that residual porosity in both intrusions decreases to zero at intermediate stratigraphic levels and then rises to the end of crystallization, recording an increased tendency to equilibrium crystallization in the late-stage rocks.  More surprisingly, the treatment of old and new data suggests that a considerable degree (4-6 mole percent) of scatter in mineral compositions within a given hand specimen is original with the accumulating crystals.  This discovery suggests that even the olivine compositions may have not equilibrated with each other over the scale of centimeters during very slow cooling from the solidus  temperature.In the meantime, theoretical and applied research on multiphase Rayleigh fractionation in magmas has yielded a quantitative test for the probability that large magma chambers may harbor an internal reservoir that replenishes the melt in a crystallization zone, allowing a much slower variation of mineral compositions than predicted by binary solutions crystallizing alone.  The implications of this study ramify throughout the local and regional mineral variation in layered igneous rocks.Recent experimental work by grad student Deb Banks McIntosh defines the phase equilibria of a model Kiglapait magma composition at pressures up to 15 kb, with coexisting spinel, garnet, and aluminous pyroxenes that break the olivine-plagioclase tie line.A new “Kiglapait Project” is being inaugurated to make available and curate electronically maps, sections, sample catalogs, chemical and mineralogical data, photomicrographs, field photos, and publications to accompany the Kiglapait sample collection at its eventual resting place at the American Museum of Natural History in New York.  Much work needs to be done